What do you get when you cross baskbetball with the latest technologies today? An army of factory-built Michael Jordans? A basketball with wings and auto-homing function to the basketball hoop? Even better: A Professional Trainers Toastmasters Club (PTTM) Meeting!

This was exactly what happened on August 9, 2016 when members and guests of PTTM became amazed by the present, reminisced about the past, and glanced at the future.

President Susanna Wong started off the meeting with a super-energetic 3-minute welcoming. This was followed by Vincent Leung hosting the Table Topics session. We were amazed by the present technology that he used to determine the Table Topics speakers: A software named "Kahoot". In addition, Vincent customized the Table Topics to the persons shown in each of the "Kahoot" questions. It was indeed a very innovative approach that introduced fun and laughter to the mix.

Next, we took a glance into the future as Samuel Poon delivered a workshop titled "Rise of the Machines". In this workshop, Samuel first provided precise one-sentence summaries that demystified the confusion people have with the acronyms of VR, AR, MR, and AI. He then elaborated on AI and brought forth a wakeup call that machines could potentially disrupt our lives through the fun game "Bot or Not". In the end, humans still have hope as we have creativity, emotions, and our subconscious mind that machines don't have. Plus, Toastmasters can help us sharpen up these aspects, so joining Professional Trainers Toastmasters Club can prepare you for the future and remain competitively advantageous.

Finally, we reminisced about the past as Kin-Ching Tang took us on a trip back on memory lane of the glory days of Michael Jordan, Steve Kerr, and the Chicago Bulls. In his workshop, KC used Jordan as an example to show us the qualities that a good leader should possess: Belief in teammates' Ability, Belief in teammates' Attitude, and Belief in own judgment. With his presentation's smooth flow, captivating pictures, and takehome message, KC has also shown that he himself is a good leader on the stage when presenting workshops.

Both workshops were followed by evaluation from two club members who suggested points of improvement for the workshop speakers to consider in the future. The meeting ended with a floor evaluation on general aspects in the meeting. What's new this time is that the workshop speakers could have a chance to self-evaluate on their own performance and clarify some points mentioned by the evaluators to carry the knowledge exchange to an even deeper level. PTTM got you covered from the past, to the present, and into the future. 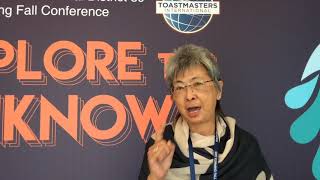